Who’s in Charge of Your Homeowners Association?

Who’s in Charge of Your Homeowners Association?

Can they do that? Whether it’s changing the pool hours, levying a special assessment, or foreclosing on your home, many homeowners are shocked when they realize just how much power an HOA Board of Directors has.

But do they really? It might surprise you to learn that the board has a lot less power (and a lot more responsibility) than you realized. Let’s dig a little deeper into HOA Governance: 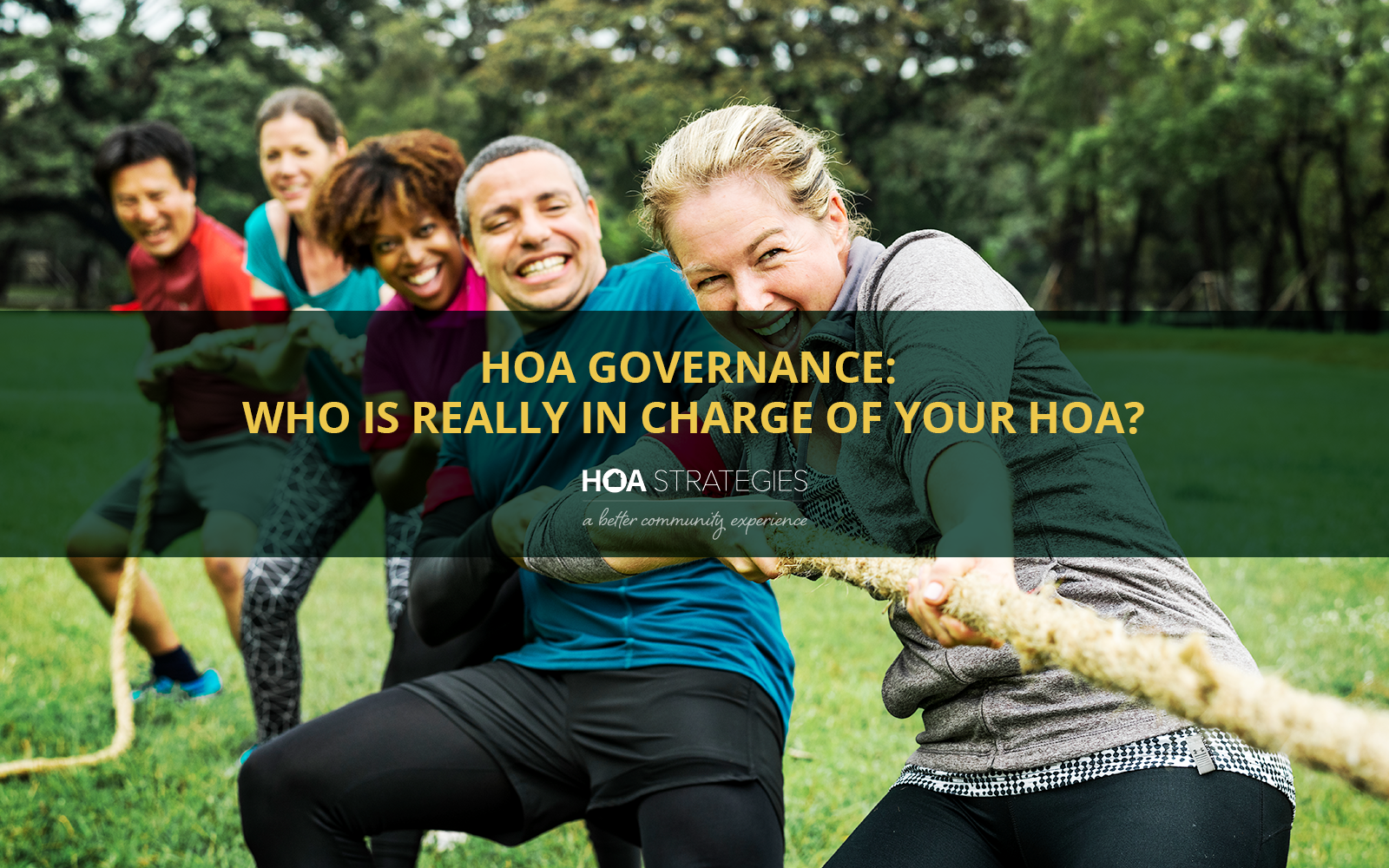 Understanding the powers of the governing documents, the Board of Directors, and individual homeowners in your Utah HOA.

Community Associations like HOAs and Condos work very similarly to a democratic government, just on a smaller scale.

At the top of the ladder is the law, which for community associations in Utah is the Revised Nonprofit Corporation Act (Title 16-6A) and the Condominium Ownership Act (Title 57-8) or the Community Association Act (Title 57-8a). Once you’re an expert at understanding all the laws, then there are the governing documents specific to your community. The governing documents include the Plat Maps and Declaration of Covenants, Conditions and Restrictions (“CC&Rs”), Articles of Incorporation, and the Bylaws (in this hierarchy order, each document trumps the document after or below it). The governing documents dictate the rules under which the community association will be governed. Of course, the association is also still on the hook for all federal, state and local ordinances that apply.

The Board of Directors are the elected officials whose job it is to uphold the rules set forth in the governing documents. Each board member has a responsibility, called their Fiduciary Duty to act in the best interest of the corporation. Under their Fiduciary Duty, the Board of Directors make decisions on behalf of the community association, covering every aspect of running the community, from financial management to making sure the pool gets cleaned.

Many homeowners are under the mistaken belief that the Board of Directors writes the Governing Documents. For the most part, this is not true.

The Source of Power: The Governing Documents

Many homeowners are under the mistaken belief that the Board of Directors writes the Governing Documents. For the most part, this is not true. The governing documents are usually defined by the developer when the community association is first formed, usually before the first home is even sold in the development.

This means that it’s not the homeowners association, or even any homeowners who are defining these core rules, it is the developer. The developer’s motivation is, of course, to sell more homes. So the governing documents are most often designed to preserve and increase property values over any other considerations.

The Executors: The Board of Directors

The Board of Directors is an elected body whose role it is to execute the governing documents on the Association’s behalf. The state of Utah defines the board’s role in the Community Association Act:

Examples of Decisions the Board Can Make:

Each board member is responsible to know federal, state and local laws plus the governing documents, and use that knowledge to inform any decisions they make on behalf of the community.

Since one cannot reasonably expect every board member to know all the ins and outs of both law and the governing documents, experts are usually brought in to advise the board in their decisions. Professionally managed communities have managers that deal with common problems on a daily basis who can advise the Board on best practices and the pros/cons of many decisions that the board may make. Community Managers will know when to engage the association’s attorney, bringing in the costly legal professionals only when truly needed.

The Equalizers: The Homeowners

Voting in a homeowners association is generally tied to the lots or units. Because membership in a HOA is usually mandatory (you become a member automatically when you buy a home in a community association) every homeowner has the right to vote at the Annual General Meeting, as well as any special elections or votes that may take place per the governing documents.

Examples of What Members May Vote On:

Other Powers Homeowners Have:

Note that these powers are usually defined in the governing documents. For example, some communities do not allow proxy voting, so be sure to check your documents before you take any action.

If You Don’t Like the Way Things Are, Act to Change Them

A lot of the bad reputation that HOAs get in the media comes from things the board has no control over, such as levying fines to enforce seemingly unreasonable rules like not allowing a certain paint color or a playhouse in your yard.

There are things that you can and should do to make your voice heard. The most important thing is to attend open board meetings, and speak up when comments are invited by the board.

But these rules were defined in the governing documents long before the current board bought their home in the community. If the board fails to enforce the rule, or picks and chooses when to enforce, they can be held legally liable.

The documents themselves often make it difficult to change them. For example, we’ve seen documents that require 67% of the membership to vote in order to make a change to the CC&R’s. Considering that many communities often have difficulty making quorum at annual meetings, it takes a lot of community activism to get 67% of the community to vote.

But there are things that you can and should do to make your voice heard. The most important thing is to attend open board meetings, and speak up when comments are invited by the board.

Utah law requires communities to provide 48-hour notice via email to any homeowner who requests it before any open meeting, as well as a “reasonable opportunity to offer comments.”

Your vote counts for a lot as well. Be sure to research the people running for the board, listen to their platform, and choose representatives who you feel will best serve the interests of the community. If you feel none of the candidates are right, run for a board position yourself!

Remember that the board are your voted representatives and their fiduciary duty means taking the opinions of the members into account when they make decisions.

Are you a Utah Community Association looking for a management company that can help advise you in making decisions that comply with the law and your governing documents? Take advantage of this free strategic evaluation to see if HOA Strategies is a good fit for your community.